I've always been fascinated by fire.  As a young child I remember bursting into tears when my pediatrician recommended to my mom that my access to matches be limited (now that doctor and I joke about that day, and of course I realize that it was probably for the best).  It should go without saying, then, that I really enjoy bonfires.  Over the years my family and I have gone through several fire pits.  Some began to melt and sag, others rusted through, and some weren't fit to hold a fire in the first place, as they have no provisions for providing ample oxygen to the flames.

Armed with my TIG welder, some angle grinders, an abrasive chop saw, and some scrap steel, I set out to build a fire pit that could handle the heat.  My first priority was feeding the flames; I knew that we'd build big fires in this thing, so we needed plenty of air for it.  I designed the bottom to be made of a reinforced expanded steel mesh, so that air could rush in from beneath once convection currents were established.  Cutting irregular shapes out from the side panels of the crib helped to make it look less like a crib, and also provided additional air to the fire as well as light to the humans that would surround it.

Finally, I designed and built a removable ash tray made of stainless steel that would make the unit far easier to clean that our old fire pits.  I chose to use the more expensive stainless steel because the tray would be a natural place for water to pool during the winter, and I didn't want it to rust through. 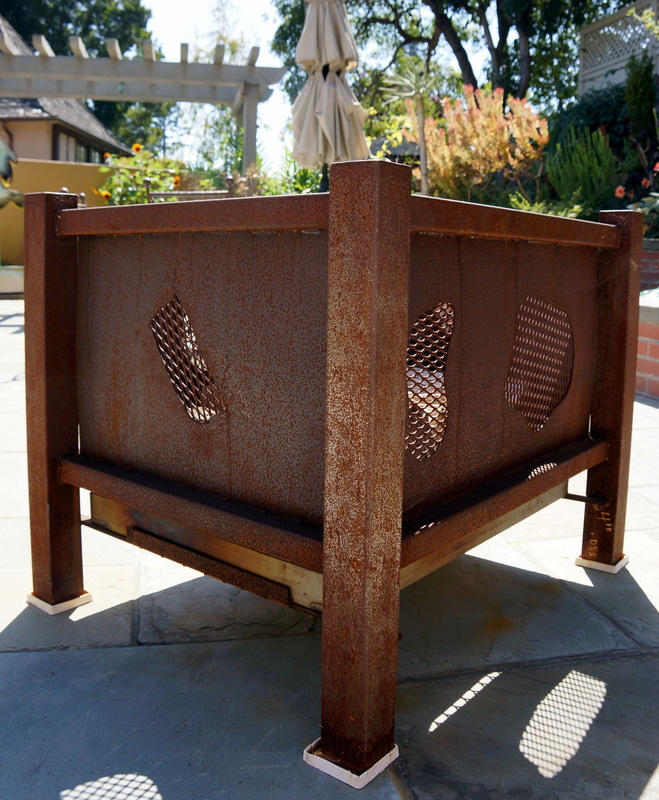 The completed unit, after a couple of years of use and exposure to the elements. I think that the rust makes it look even better than it did new.